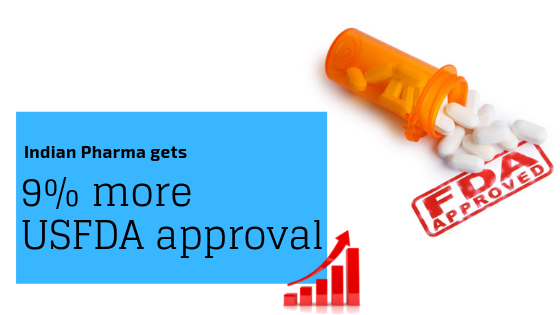 Indian Pharma companies received 372 approvals to launch generic drugs in the US fiscal 2019, up 8.6% from 340 in the previous year. The development comes even as India got 15 warning letters in calendar 2018, lower than the US with 19, and China which topped the list with 24 warning letters. As against this, India had the ignominious distinction of topping the list with 9 warning letters in 2015 and has since appeared to have cleaned up this act.
In terms of approvals, Zydus Cadila topped the list with 60, with Indian companies cornering nearly 40% volume share in highly remunerative $60-billion-plus US generic market- a key driver of growth for the domestic industry. In an indication of having resolved data integrity issues by investing in skill sets, domestic companies grabbed the opportunity by the US Food and Drug Administration (USFDA) to speed up the generic competition.
Indian generic filings have been rising year-on-year, unfazed by regulatory pressure from the USFDA, and a spate of warning letters issued to their facilities over the last couple of years. Over 2015-17, Indian companies have faced intense regulatory glare from the US, with nearly all top companies having been issued warning letters over manufacturing violations at their plants. This seems to have changed last year with fewer warning letters for Indian companies, compared to other major countries.

However, in 2018 India received fewer warning letters compared to the other nations.

Go to Top
We use cookies on our website to give you the most relevant experience by remembering your preferences and repeat visits. By clicking “Accept All”, you consent to the use of ALL the cookies. However, you may visit "Cookie Settings" to provide a controlled consent.
Cookie SettingsAccept All
Manage consent

This website uses cookies to improve your experience while you navigate through the website. Out of these, the cookies that are categorized as necessary are stored on your browser as they are essential for the working of basic functionalities of the website. We also use third-party cookies that help us analyze and understand how you use this website. These cookies will be stored in your browser only with your consent. You also have the option to opt-out of these cookies. But opting out of some of these cookies may affect your browsing experience.
Necessary Always Enabled

Performance cookies are used to understand and analyze the key performance indexes of the website which helps in delivering a better user experience for the visitors.

Analytical cookies are used to understand how visitors interact with the website. These cookies help provide information on metrics the number of visitors, bounce rate, traffic source, etc.

Advertisement cookies are used to provide visitors with relevant ads and marketing campaigns. These cookies track visitors across websites and collect information to provide customized ads.

Other uncategorized cookies are those that are being analyzed and have not been classified into a category as yet.