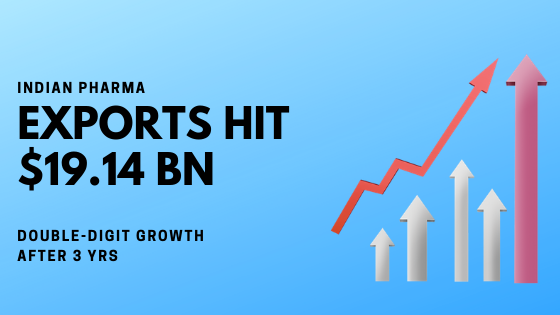 The recent annual report by Pharmaceutical Export Promotion Council (Pharmexcil) claimed that the total pharma exports from India have shown a heartening double-digit growth of 10.72 percent at $19.14 billion for 2018-19 as compared to last year’s pharma exports of $17.28 billion.

Earlier, the double-digit growth in Indian pharma exports was witnessed in 2015-16, when total exports of $ 16.89 billion were registered at a growth rate of 10.17 percent. The current double-digit growth occurred after three years of flat-to-marginal export growth, mainly driven by formulations exports to North America among other destinations

Giving a performance break-up of individual categories within the pharma segment, The Union Commerce Ministry’s nodal agency said that the export of drug formulations and biologicals, which grew at 12.13 percent vis a vis total growth of 10.72 percent. Thus, drug formulations and biologicals added close to $1.5 billion to the total pharma export revenues this time around.

The data shows that formulations accounted for 70.87 percent of the total pharma exports in the year 2018-19, with a total contribution of $13.56 billion.

“India’s export of generics is growing 2.2 times faster as compared to global generics market growth, which is reported to have grown at just over 5 percent in 2018 calendar year,” Pharmexcil said. Except December 2018, which did not show promising growth, exports of formulations through the year has done well and the average exports of formulations during the year registered $1.14 billion a month, according to the report.

Herbal products, being the only category of pharmaceuticals that showed negative growth in exports this time, registered $299 million of exports as compared to $312 million in the previous year.

The top 25 export destinations contribute approximately three fourth of the formulation exports amounting to $10.38 billion. The US maintains the position of being the largest export destination with over 38.62 percent of the total generic exports to that country at $5.24 billion.

As per the data released by the Director-General Commercial Intelligence and Statistics (GGCIS) for the month of February 2019, the pharmaceutical agency maintained that the price erosion was beginning to stagnate and recovery in margins was seen in the US.